This tutorial will show you how to simulate the DNA melting experiment with Matlab. The DNA melting apparatus you will build produces two output voltages related to the sample temperature and fluorescence intensity. During an experimental run, these two voltages will be recorded periodically. At the end of this tutorial, you should be able to produce mock datasets that are similar to what you will record in the lab. You can use simulated datasets to help develop and debug your data analysis scripts.

It will be essential to have working data analysis scripts before you begin running experiments in the lab. When you have completed this tutorial, refer to the lab manual for data analysis instructions.

The procedure for creating the simulation is:

You will not have to write any new code to complete this tutorial; however, you should open a Matlab window and follow along as you read. Code from this page can be copied and pasted into the Matlab command window. M-files are available in the course locker.

If you prefer to work in Python, please see this page.

We derived an expression for dsDNA concentration at a given temperature in class:

Since this is a very complicated equation and we will use it many times, it makes sense to write a Matlab function.

The fraction of dsDNA is a function of 4 variables: ΔS°, ΔH°, temperature, and concentration. The DnaFraction function below takes four parameters to represent these quantities and an optional fifth parameter that causes the function to use a different value of the gas constant. Changing the fifth parameter allows the same function to operate with different unit systems.

The element-by-element divide operator in the body of the function makes it possible for DnaFraction to accept either a single temperature argument or a vector of temperature values. (As a general rule, use the ./ operator instead of / unless you intend to do a matrix divide.)

To use this function, save it in a file called "DnaFraction.m" (MATLAB requires that all functions be saved in a file that has the same name as the function appended with the extension ".m".) The file must reside in the current directory or another directory that is on your Matlab path. Function help should be placed in comments at the top of the file. Type help DnaFraction to see how this works.

Does the DnaFraction function work as expected? A good way to test the function is to plot a melting curve generated by DnaFraction.

Matlab notes: Over the course of an interactive Matlab session, you may run several simulations with different parameters. Using a structure to keep the results of each simulation together is a good way to prevent the workspace from becoming disorganized. The struct function creates an empty structure. In the code below, a structure called ideal is created to hold the ideal melting curve data. (Since variables are dynamically allocated and typed in Matlab, the struct command is optional; however, explicitly creating the structure can make your code easier to read and better performing.)

Since DnaFraction accepts a vector temperature argument, an entire melting curve can be computed with a single call. 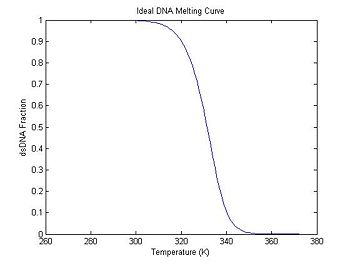 Experiment with different values of ΔH° and ΔS° to see how the curve changes. You can use OligoCalc or another tool to estimate values for different DNA sequences.

The fluorescence function fN is a sampled version of the continuous function f(T) such that fN = f(NΔT), where ΔT is the sampling interval (1° C, in this instance). One method for computing a numerical approximation to df/dT is the finite difference:

dF/dT is guaranteed to take on the value given by f'N at some point between NΔT and (N+1)ΔT; however, this happy coincidence can occur at any place in the interval. A simple but effective technique is to guess that equality occurs in the middle of the interval. This guess is close enough in most cases.

The code below computes the finite difference and stores it in the dDsDnaFraction field of ideal. It also generates an associated temperature vector (ideal.dTemperature) with values centered between the original temperature samples. Note that both vectors are one element shorter than the original data. 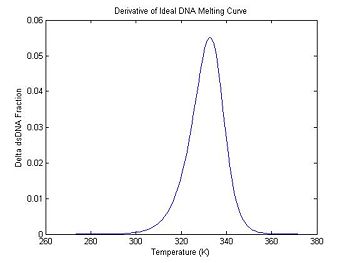 In the previous section, the plot shows that the dsDNA fraction equals 0.5 at about 332.5 degrees. The peak of the derivative also occurs at the same temperature. (The curve is plotted inverted.)

It will be convenient to set up a data structure with the simulation parameters and a time axis.

The goal of the simulation is to produce two simulated voltage signals that resemble what you will measure in the lab. Since both of the voltages are functions of temperature, it makes sense to begin by modeling how the sample cools during an experimental run.

Cooling can be approximated by an exponential function with a time constant of about 3 minutes. The equation for temperature (in °K) versus time is:

T(t) is the temperature as a function of time,
Ti is the initial temperature (after heating),
Tf is the final (ambient) temperature,
τ is the time constant. 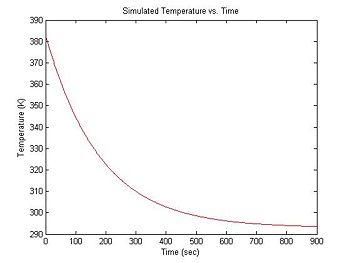 If you have any questions about the element-by-element division operator in Matlab (./) see:this page.

The resistance of the RTD is given by the equation RRTD = 1000 + 3.85(T - 273). In the experimental apparatus, the RTD is hooked up as one element of a voltage divider with another resistor, R. The power supply is 15 volts. Thus, the output voltage is: VRTD = 15 * RRTD/(R + RRTD). The following code calculates RTD voltage measurements from sim1.temperature and stores the result in sim1.V_RTD, assuming R = 20KΩ. 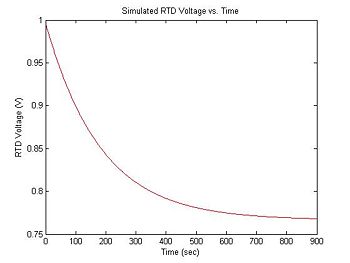