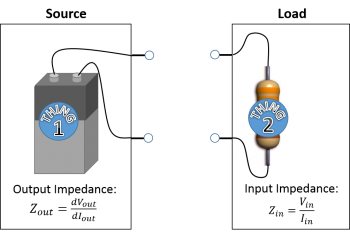 Let's look at an example of connecting a battery to a resistor. When we see a 9V battery, we often think it should output 9V from its terminals. It truly does, but only when it's not sourcing any current. It turns out that there is some internal impedance inside the battery that prevents the output voltage from remaining at 9V once current starts to flow. We can thus model the battery as a pure voltage source in series with a resistor, where the resistance value $ R_{out} $ is equal to the output impedance of the battery. Here is an example of a 9V battery's I-V curve (current-voltage relationship). 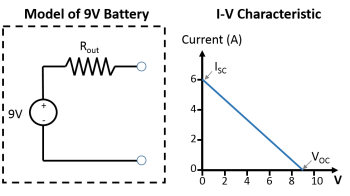 Now let's connect load to this source. For simplicity, we will connect a resistor with resistance $ R_{in} $. Hence, the input impedance of this load is equal to $ R_{in} $. When we plot the I-V characteristics of the load with the source, the intersection of the two lines is the operating point.

The load has an output impedance equal to $ R_{out} $. When the load is connected to the source, the operating point is given by the intersection of the two lines on the I-V plot. The operating point gives the voltage applied across the load, as well as the amount of current flowing through it.

Here we can see that once the load is connected to the source, the output voltage is no longer 9V; rather it is given by the operating point. The example drawn above shows the 9V battery having an output resistance of 1.5Ω and the load having an input resistance of 3Ω. If you use voltage divider relations to calculate the voltage being applied across the load, and the current flowing through it, you will find it to be 6V and 2Ω, respectively, as given by the operating point graphically. This shows us that even though the 9V battery outputs 9V when there's no current flowing, once we apply the load, the output voltage drops down to 6V to account for the increased current flow.

What would have happened if the load resistance were very high? Think about how the change in slope of the I-V curve for the load would affect the operating point.

1. What is the output impedance $ Z_{out} $ of the following circuit? We want to connect another circuit to the blue nodes.

2. If we want to connect another low pass filter (Circuit 2) in series with the circuit from Question 1 (Circuit 1), what criterion must hold for us to ignore the loading effects of the second circuit? Write your answer in terms of $ Z_1, Z_2, Z_3, Z_4 $. 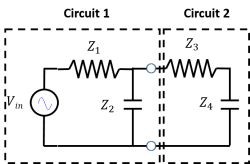 3. If we find that the criterion from Question 2 does not hold true, and Circuit 2 is loading Circuit 1, what can we put in between the two circuits to isolate their effects?

Solution: A buffer, consisting of an op-amp. We model an op-amp as having very low or negligible output impedance, and very high or infinite input impedance. Thus it can buffer the effects between two circuits as shown below.