Flow cytometry is a cell analysis technique that has revolutionized biology by allowing researchers to analyze and isolate cells based on their physical and fluorescent qualities. Genetic reporters, labeled antibodies and small molecule tags or dyes may be used to introduce fluorescent signal into cells. You can isolate a pure sample of a particular cell type from a complex mixture of cells by using a modified flow cytometer equipped to perform FACS: Fluorescence Activated Cell Sorting. If the machine is only able to count, and not sort subpopulations of cells, then the procedure is called flow cytometry, while cell sorting is called FACS.

Today we will be using FACS to sort a library of yeast, a library is a collection of DNA fragments, usually on plasmids, that is stored and propagated in a population of microorganisms. A single microorganism carting one plasmid in the library is called a clone. These yeast are expressing a single-chain antibody fragment (scFv) that binds to the enzyme lysozyme. Lysozyme is an abundant, inexpensive and commercially valuable enzyme for the food and pharmaceutical industry. Our goal is to find a clone of a single-chain antibody fragment that has improved binding to lysozyme over the parental clone Lyso_scFv_6. We will use fluorescently labeled antibodies to mark yeast that express the scFv and fluorescently labeled streptavidin to mark the presence of bound lysozyme. Using these two fluorescent markers together we will isolate a population of yeast from the library that bind to lysozyme with high affinity. 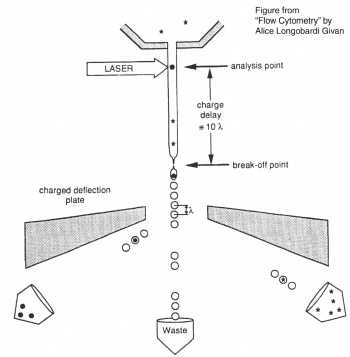 Principle of FACS analysis.
Before researchers had flow cytometers, there were Coulter counters. Coulter counters are automated cell counting machines developed in the 1950s that count cells as they flow in a liquid stream. In an ingenious conceptual leap, Mack Fulwyler combined the technology of ink jet printers with that of Coulter counters to develop the first flow cytometer. The ink jet printer head works by vibrating a nozzle so that a spray of discrete droplets is formed. Similarly, in a flow cytometer, a liquid suspension of cells is forced at high pressure through a vibrating nozzle to create tiny charged droplets, each containing a single cell. The stream of droplets passes in front of a laser beam, and the scattered light is analyzed by a series of filters and photomultiplier tubes that convert the light signal into electrical impulses. Thus, each cell is "interrogated" and this is represented in the software as an event. In FACS, the spectral qualities of the cell are analyzed nearly instantaneously and compared to user-specified spectral qualities. For example, if you have a mixture of green fluorescent cells and non-fluorescent cells, you can ask the machine to isolate the green cells. If a cell or "event" registers as green, an electrical charge deflects the cell causing it to fall into a collection chamber.

Fluorescence Activated Cell Sorters and flow cytometers have been around since the 1970s, and while the details are fancier (more colors, faster measurements, etc), the general principles have remained the same. It is truly a testament to the versatility and utility of flow cytometry that the technology does not look to be supplanted by another approach any time soon.

Motivation: To screen the new scFv library for improved binders to the antigen, lysozyme, we must incubate the yeast with lysozyme then use fluorescent antibodies to quantify the scFv expression and lysozyme bound.

The library of yeast you will be sorting today were started from a population of cells that was tenfold the estimated starting library diversity (estimated number of unique clones generated) to assure we will have adequate coverage of the single-chain antibody fragment clones represented in this population. The single-chain antibody fragment (scFv) expression was induced by growing the EBY100 yeast transformed with the plasmid library in SGCAA media (containing galactose) overnight at 20°C. The galactose in the media activated expression of proteins under the GAL 1 promoter and the lower temperature 20°C rather than 30°C assures proper protein folding. 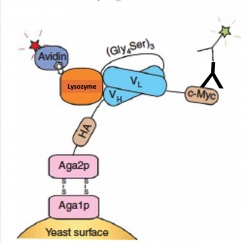 Motivation: To harvest the yeast cells expressing scFvs with improved binding to lysozyme we must quantify the binding capacity and separate out improved binders via Fluorescence Activated Cell Sorting.

Cell sorting, or FACS, is technically challenging and most FACS machines are only run by experts. This analysis will be done by Sarah, a trained PhD student in the Wittrup lab, and we will describe the main steps to cell sorting during the video and they are detailed below.

To ensure the steps included below are clear, please watch the video tutorial linked here: FACS of yeast candidate clones bound to lysozyme. 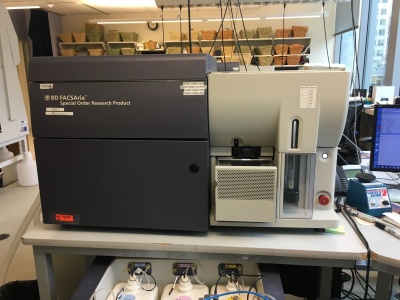 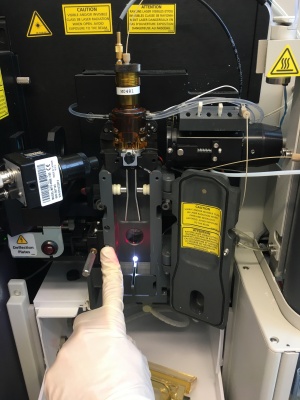 The key to collecting the population of cells you would like is running the appropriate controls to identify these cells accurately on the FACS machine. The first control to analyze is the mock/negative control; for our experiment this is unstained yeast (condition 3). Open the scatterplots for this control in the following link: no label control.

Note that this data is represented in a density scatterplot, meaning the highest density of cells is red and lowest density of cells is blue. The red/yellow/green/blue hot spots indicate increasing numbers of events resulting from discrete populations of cells. The density plot representation enables grouping of the peaks and valleys that distinguish subsets of cells.

These cells are first analyzed using side scatter versus forward scatter after the cell passes through the analysis point of the laser. Forward scatter (FSC) is a measurement of the sample's refraction of light and therefore often is correlated with cell size. Side scatter (SSC) tells us something about internal complexity of the cell, like size of nucleus or other organelles. The cells should be the largest objects in the solution, while dust and cell debris will fall at the lower left of the scatter axis. Cell aggregates are common and will appear in the top right of the scatter axis. Experienced users can delineated gates to separate single yeast cells from doublets or aggregates. Gates are drawn or selected by the user in the software and select cell populations with particular characteristics, like size or fluorescent labels. Gates P1, P2, and P3 are drawn to select for single yeast cells and exclude debris or cell aggregates.

In last plot on the lower right, the cells are analyzed by the fluorescent signal from the laser measurements. This BDFACS Aria II is configured as a two laser system, a Blue laser (488nm) and a Red laser(633nm). We must choose the optical filters that are appropriate for our fluorophores attached to our secondary antibody and antigen label. For this system we will use the FITC-A and APC-A filters. The FITC filter measures AF488, detecting our scFv expression, and the APC filter detects AF647, detecting the presence of the ligand. We'll talk more about filter selection later in the module but if you'd like to consider the fluorophore and filter options the BD Spectral Viewer BD Spectrum Viewer is a great tool. The unstained yeast have no fluorophores associated with the cells so we should see a single population of cells in the lower left of the FITC v. APC plot that represents no fluorescent signal.

Next we look at our single-color fluorescence negative staining controls (conditions 4 and 5). Open the scatterplots for these controls in the following links: 488neg control and 647neg control.This allows the user to establish the signal from that single fluorophore that might be nonspecifically sticking to the yeast expressing scFv. These samples will be yeast stained with secondary antibodies conjugated to fluorophore AF488(green) alone and yeasted stained with streptavidin conjugated to AF647(far-red) alone. If a population of the yeast library are binding nonspecifically to the secondary antibody or streptavidin these cell populations should be excluded from the sort.

Finally, we look at our positive control (condition 2), the previously characterized clone Lyso_scFv_6. Open the scatterplot for this control in the following link: positive control. This allows the user to establish the population of cells that express scFv and bind to lysozyme. These samples will be yeast stained with antibodies conjugated to fluorophore AF488 (green) and with streptavidin conjugated to AF647 (far-red).

By collecting the cells that have higher green and higher far red signal than our parental clone we hope to identify scFv clones that have improved lysozyme binding during the analysis and sorting of the newly generated scFv library (condition 1). Open the scatterplot for the experimental sort in the following link: library sort with 5nM lysozyme.

Consider the key components of an introduction:

From the Results and Discussion

Carefully examine the figures. First, read the captions and use the information to 'interpret' the data presented within the image. Second, read the text within the results section that describes the figure.

In this paper the results are interpreted and discussed as they are described in the text: