In the previous laboratory session you isolated the protein fraction from cell lysates. Today you will separate the proteins in the lysates using a polyacrylamide gel and transfer the proteins onto a nitrocellulose membrane. This step enables you to 'probe' the protein fractions isolated from cells for your protein of interest, which in our experiment is BRCA2. To probe the membrane, it was incubated with two primary antibodies overnight by the teaching faculty - α-BRCA2 and α-α-tubulin. The α-BRCA2 antibody was raised in a rabbit and the α-α-tubulin antibody was raised in a mouse. Primary antibodies bind directly to the protein of interest. Today you will add a secondary antibodies. Each secondary antibody will bind to the appropriate primary antibody and provide a means for visualization - in our experiment, the secondary antibody is responsible for a fluorescent signal...think back to the anti-His antibody used in module 1!

The ability to bind specific proteins using antibodies, or immunoglobulins, is critical in Western blot analysis. Antibodies are typically 'raised' in mammalian hosts. Most commonly mice, rabbits, and goats are used, but antibodies can also be raised in sheep, chickens, rats, and even humans. The protein used to raise an antibody is called the antigen and the portion of the antigen that is recognized by an antibody is called the epitope. Some antibodies are monoclonal, or more appropriately “monospecific,” and recognize one epitope, while other antibodies, called polyclonal antibodies, are in fact antibody pools that recognize multiple epitopes. Antibodies can be raised not only to detect specific amino acid sequences, but also post-translational modifications and/or secondary structure. Therefore, antibodies can be used to distinguish between modified (for example, phosphorylated or glycoslyated proteins) and unmodified protein.

Monoclonal antibodies overcome many limitations of polyclonal pools in that they are specific to a particular epitope and can be produced in unlimited quantities. However, more time is required to establish these antibody-producing cells, called hybridomas, and it is a more expensive endeavor. In this process, normal antibody-producing B cells are fused with immortalized B cells, derived from myelomas, by chemical treatment with a limited efficiency. To select only heterogeneously fused cells, the cultures are maintained in medium in which myeloma cells alone cannot survive (often HAT medium). Normal B cells will naturally die over time with no intervention, so ultimately only the fused cells, called hybridomas, remain. A fused cell with two nuclei can be resolved into a stable cell line after mitosis.

To raise polyclonal antibodies, the antigen of interest is first purified and then injected into an animal. To elicit and enhance the animal’s immunogenic response, the antigen is often injected multiple times over several weeks in the presence of an immune-boosting compound called adjuvant. After some time, usually 4 to 8 weeks, samples of the animal’s blood are collected and the cellular fraction is removed by centrifugation. What is left, called the serum, can then be tested in the lab for the presence of specific antibodies. Even the very best antisera have no more than 10% of their antibodies directed against a particular antigen. The quality of any antiserum is judged by the purity (that it has few other antibodies), the specificity (that it recognizes the antigen and not other spurious proteins) and the concentration (sometimes called titer). Animals with strong responses to an antigen can be boosted with the antigen and then bled many times, so large volumes of antisera can be produced. However animals have limited life-spans and even the largest volumes of antiserum will eventually run out, requiring a new animal. The purity, specificity and titer of the new antiserum will likely differ from those of the first batch. High titer antisera against bacterial and viral proteins can be particularly precious since these antibodies are difficult to raise; most animals have seen these immunogens before and therefore don’t mount a major immune response when immunized. Antibodies against toxic proteins are also challenging to produce if they make the animals sick.

For Western blot analysis, a high quality antibody can have a relatively low affinity for its target protein. This is because the target is localized and concentrated on a blot, allowing the antibody to bind using both antibody “arms” thereby strengthening the association. Even an antibody that is loosely bound to the blot under these circumstances may dissociate then re-associate quickly since the local concentration of the target protein is high. The lower limit for protein detection is approximately 1 ng/lane, a value that varies with the size of the protein to be detected and the Western blotting apparatus that is used. For most polyacrylamide gels, the protein capacity for each lane is 100 to 200 μg (that would be 20 μL of a 5-10 μg/μL protein preparation). Thus, 1 ng represents a protein that is approximately 0.0005-0.001% of the total cellular protein (1 ng out of 100,000-200,000 ng). Proteins that make up a more significant fraction of the total protein population will be easier to detect.

Traditionally, only one species of antibody could be used on a Western blot because the detection relied on the emission of light that was collected by x-ray film. In the traditional systems the output looks like black bands on a blue or clear background. However, more recent conjugate chemistry has allowed secondary antibodies to be coupled to fluorescent tags. Today we will use infrared (IR) secondary antibodies to detect our α-BRCA2 and α-tubulin antibodies and then scan the Western blots using a specially constructed microscope located in the Lauffenburger lab to determine the level of BRCA2 in our cell lines. 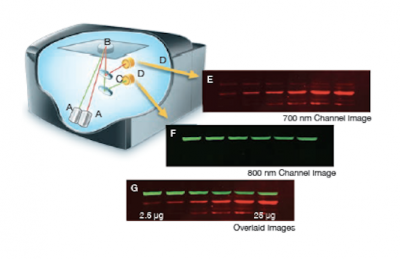 Licor detection of IR-dye conjugated antibodies. Image was modified from the Odyssey manual.
The Licor Odyssey scanner consists of an inverted microscope with two lasers that excite dyes which emit light in the IR range. As depicted in the image on the right, an excitation point is created when beams from the 700 nm and 800 nm lasers (A) are focused on the scanning surface. The microscope objective (B) is focused on the excitation point and collects light from the fluorescing IR dyes. This light is passed through a dichroic mirror (C) that separates the light into two distinct signals that travel through two independent optical paths that are focused on separate silicon photodiodes (D) and detected. In the image, the first channel (E) and second channel (F) are shown separately and merged (G).

We will detect our IR-dye conjugated secondary antibodies at wavelengths of 700 and 800 nm. The 700 nm channel will appear red and the 800 nm channel will appear green. Infrared secondary antibodies provide a more flexible detection platform than the traditional Western blot detection methods that rely on colorimetric or chemiluminescent substrates. Unlike the colorimetric or chemiluminescent detection methods, IR dyes do not require a chemical reaction to occur in order for signal to be detected. This means that the output signal increases with time as the colorimetric or chemiluminescent substrate reaction proceeds -- making timing an important variable in traditional Western blot development. We remove that variable from the equation and control when we want to visualize our Western blot simply by controlling the excitation of the dye.

Part 1: Workshop with BE Communication Lab

Our communication instructor, Dr. Diana Chien, will join us today for a workshop on transforming a written journal article into a well-defined oral presentation.

Last time, you prepared protein extracts from DLD-1 and BRCA2- cells and they were stored at -20 °C. In this exercise you will separate the proteins using SDS-PAGE and then transfer the proteins onto a nitrocellulose membrane for antibody probing.

24 hours before your next laboratory session, the teaching faculty will pour off the blocking buffer and incubate your membrane at 4 °C in the primary antibody solution until you return.

To measure gene expression of DNA cell cycle checkpoint factors, you will perform quantitative PCR (qPCR). In qPCR, the amount of a specific transcript can be measured by probing the RNA sequence with primers. We will discuss the details more on M2D9.

In this exercise, you will induce DNA damage in the cells you seeded in the previous laboratory session. Next class you will purify RNA from your cells for quantitative PCR analysis.