DNA can be put into mammalian cells in a process called transfection. If you wanted to make a mouse cell fluoresce green, you could transfect it with DNA carrying the EGFP open reading frame, a promoter directing transcription of EGFP and a signal sequence for polyadenylation of the mRNA. The promoter tells the cell that the EGFP sequence should be transcribed by RNA polymerase. The polyadenylation sequence assists in the export and stability of the mRNA so that it gets translated by the ribosome. The coding sequence tells the ribosome which amino acids should be joined together.

Mammalian cells can be transiently or stably transfected. For transient transfection, DNA is put into a cell and the transgene is expressed, but eventually the DNA is degraded and transgene expression is lost (transgene is used to describe any gene that is introduced into a cell). For stable transfection, the DNA is introduced in such a way that it is maintained indefinitely. Today you will be transiently transfecting your cultures of mouse embryonic stem cells.

There are several approaches that researchers have used to introduce DNA into a cell's nucleus. At one extreme there is ballistics. In essence, a small gun is used to shoot the DNA into the cell. This is both technically difficult and inefficient, and so we won't be using this approach! More common approaches are electroporation and lipofection. During electroporation, mammalian cells are mixed with DNA and subjected to a brief pulse of electrical current within a capacitor. The current causes the membranes (which are charged in a polar fashion) to momentarily flip around, making small holes in the cell membrane that the DNA can pass through.

The most popular chemical approach for getting DNA into cells is called lipofection. With this technique, a DNA sample is coated with a special kind of lipid that is able to fuse with mammalian cell membranes. When the coated DNA is mixed with the cells, they engulf it through endocytosis. The DNA stays in the cytoplasm of the cell until the next cell division, at which time the cell’s nuclear membrane dissolves and the DNA has a chance to enter the nucleus.

Today you will lipofect several DNA samples into your mouse embryonic stem cells. As a positive control, you will transfect one sample with a plasmid encoding full-length EGFP. This plasmid will cause any transfected cells to fluoresce green. Next time we will measure fluorescence of your positive control to assess the success rate of the transfection.

You will also be transfecting two experimental plasmids, one of which you have been constructing for weeks. The EGFP coding sequence on these plasmids is truncated at either the 5’ or 3’ end of the gene. Cells expressing these truncated EGFPs should not fluoresce green. The plasmids provide a wonderful tool for studying recombination since a cell will fluoresce green if it has been transfected with both plasmids and has recombined the genes to regenerate a full-length EGFP. Finally, you will be using the truncated EGFP plasmids to investigate the effect of double strand breaks on the frequency of recombination.

Elaborate mechanisms for coping with DNA breaks have evolved since these forms of DNA damage are so dangerous for the cell. DNA with double strand breaks can be repaired according to the Szostak model, named after the person who first described it. According to this model, illustrated below, a gap in one chromosome is repaired through an interaction with its homologous chromosome. The repair first requires “homology searching” and invasion of the gapped DNA (blue) into the undamaged copy (red). The undamaged DNA serves as a template for missing sequences, which are copied and then resolved as indicated by the open triangles on the figure below. Resolution can lead to exchange of sequences flanking the original double strand break, resulting in recombination of genetic information. Alternatively the integrity of the original genetic material is preserved when the repaired strands resolve without crossover. 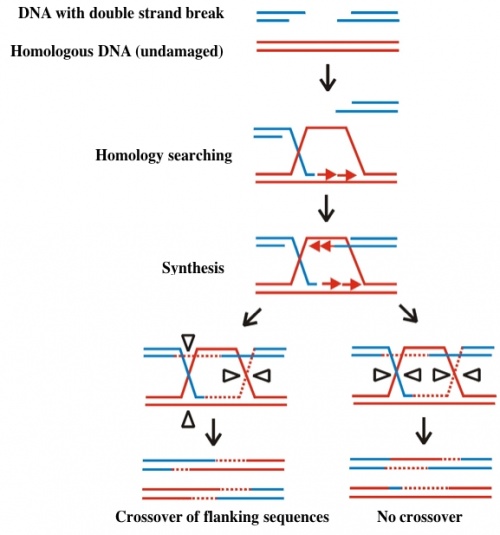 Different, and far simpler means of repair are possible if the broken ends of the DNA can be held together, either through base pairing of the overhangs or through the chromatin structure surrounding the damage. Your investigation today will assess recombination rates for different DNA lesions. All the lesions are double stranded breaks but they differ in length of the single stranded overhangs.

In anticipation of your lipofection experiment, one of the teaching faculty plated 1x105 cells in 16 wells of a pregelatinized 24-well dish 24 hours ago. A special media formulation without antibiotics was used.

A schematic for your experiment is shown below. We will discuss in class different things we might test, and we will use wells labeled 'A' and 'B' to test two parameters that might affect the frequency of inter-plasmid homologous recombination. 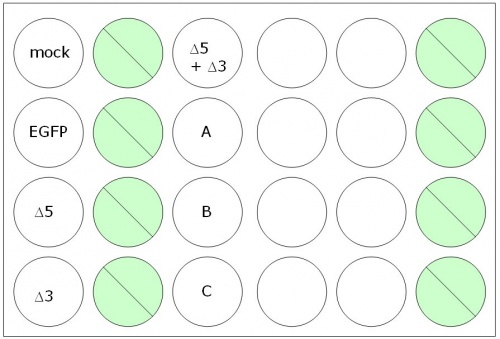 All manipulations are to be done with sterile technique in the TC facility.

Timing is important for this experiment, so calculate all dilutions and be sure of all manipulations before you begin.

For each lipofection you will need

While half of the class works in tissue culture, the other half will have a brief lecture on statistics followed by a practice exercise. Please download the following file: Media:S08_20109_M1D7-Stats.xls

Update: No homework will be collected next time. Note that in addition to finishing your Methods and revising your Introduction, you are currently in a position to write the first few portions of your Results, on constructing and assaying the Δ5 plasmid.